Somewhere near the beginning of the lockdown, I had ten days off work.

We were supposed to be going down to Devon to see my parents, but of course the travel restrictions put paid to that.

Which was a shame, because for the first time in living memory, I’d actually picked a week for the family holiday where the weather was absolutely blissful. Well, it can’t be helped. Instead, stuck at home, I decided to paint a mural on the blank wall just outside our kitchen window.

I have to admit that we haven’t paid our tiny little back yard much attention since we moved into the house a good seven years ago. It barely gets any sun; it’s completely paved over apart from a single flower bed, which was home to an ageing buddleia when we first moved in. The buddleia eventually collapsed with age, and the flower bed, well, it’s more the cats’ toilet than anything else.

But quarantine has given us time, if nothing else. And if not now, then when?

I had a quick look at some absolutely heartbreakingly beautiful murals on Pinterest, and then started doodling on my laptop and soon came up with a design I liked.

Don’t be like me, though! It’s obvious that it would have been much better to:

Still, me being me, and hindsight being 20:20, I didn’t do either of those things. Here’s the drawing I came up with:

– which is narrower and taller than the actual wall, and uses digital colours that aren’t necessarily replicable in physical media.

In the end it didn’t matter too much: after all, the only client here was myself, and I am pretty lenient. And also, pretty used to fudging things. Probably because of a result of always being like this.

My friend Karen Rubins had mentioned on a Facebook thread that she recommended Lascaux paints for murals. They’re weather resistant, they flow and mix nicely, and they come in a range of beautiful deep colours. They are a bit pricey, but they’re far more suitable than cheaper acrylics that might work fine on paper but are just the wrong texture and thickness for a wall painting. 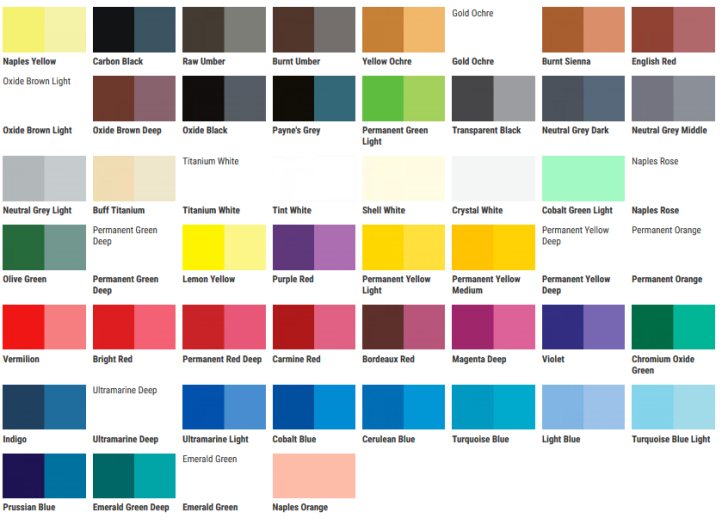 So, once I had attempted to match the colours from my sketch to the colours available (or what I optimistically thought I could mix those colours into), I put in an online order and started getting the canvas ready.

Lots of the house and garden walls here in Brighton are made of ‘bungaroosh’, one of those weird local words you won’t hear anywhere else, but which you’ll hear a lot once you move here. It basically translates as ‘lumps of flint and brick held together with straw, mortar, and whatever random materials the builder could chuck in’ and it’s the bane of Brightonians’ lives.

If you try to put a nail in the wall, you’ll either make a massive hole in the mortar, Daddy Pig-style, or you’ll hit a hard lump of flint that even a diamond-tipped drill wouldn’t make a dent in.

Tellingly, there’s a quote on the Wikipedia page for bungaroosh:

A common maxim states that much of Brighton “could be demolished with a well-aimed hose”; the supposed extent of this destruction varies between “a third” and “half” depending on the source.

So bear in mind that I think that’s what is behind the render of this piece of wall.

Anyway, while I was waiting for my acrylics to arrive, I first swabbed down the render with a bleach solution. At one point it had been painted white, but over time it had acquired some black marks and general muckiness.

While I was doing this, I noticed that there were quite a few dents and uneven parts, so I braved the socially-distanced queue at Screwfix (which is handily just down the road) and came home with some filler, as well as some primer.

At the foot of the wall, the render was bubbling up a bit and it was clear that there was some damp. The other side of it is the neighbours’ outhouse, so it’s not something I could do much about. As it happened, I found some ‘damp stop’ paint in the shed which warned several times in its small print that it couldn’t prevent damp, just try to cover it up. Call it lockdown recklessness if you will, but I chose the ‘la la la can’t hear you’ path and painted it onto the bottom quarter of the wall anyway, figuring it couldn’t really hurt. 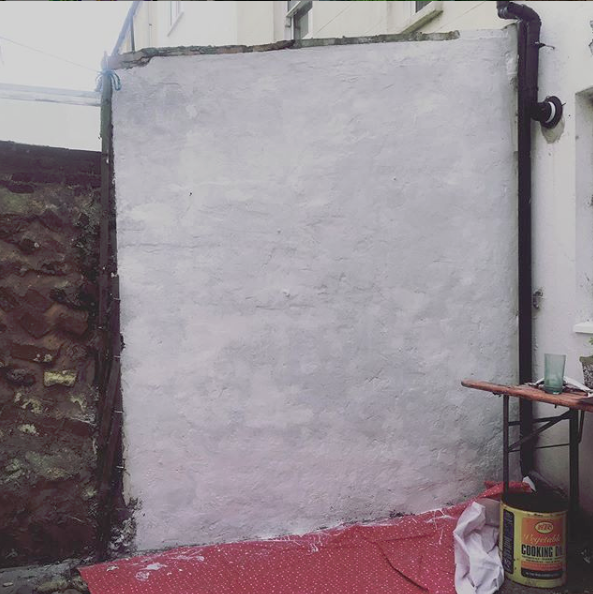 A tip I’d picked up from one of those Pinterest links was to project the design onto the wall, and then use chalk to draw in the lines (another way, that would rely much more on skill and concentration, is to divide your image into a grid and then copy it across by eye).

I’d somehow imagined this would be fairly easy: in fact I had visions of the whole family coming out to the yard after dark and having fun helping me trace the projected image. But real life ain’t like that: my loved ones weren’t interested, and it was hard to position the projector properly, balanced as it was on a sloping shed roof. Turns out that if you just nudge it a fraction of a centimetre, the image veers wildly, over the wall and onto the neighbours’ facades.

And then, because the yard is so small, I couldn’t get far back enough to get the whole image on the wall at once. I had to do half at a time, and then try to match them up. 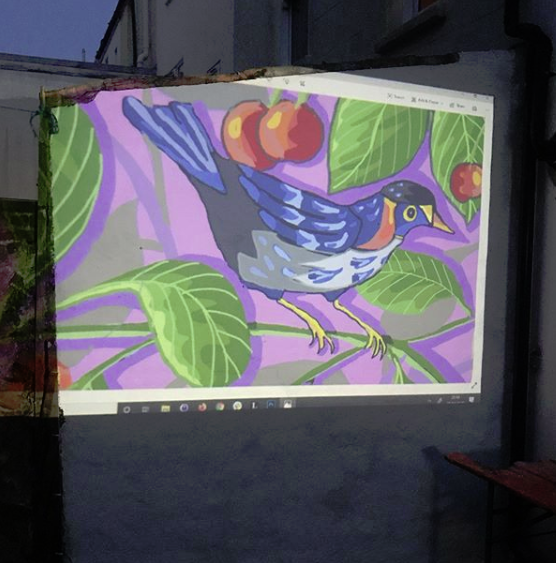 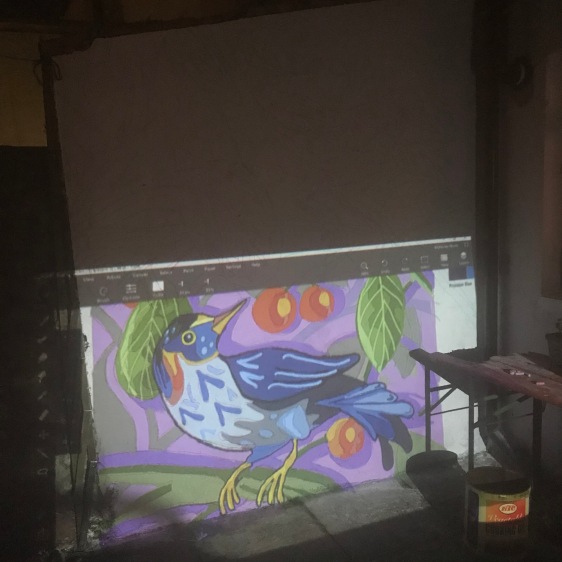 In the light of day it turned out it wasn’t too bad, but I did have to resketch the middle portion somewhat. As I’ve already mentioned, fudging is a way of life to me, though, so it could’ve been worse.

Cut to several days later when a small box arrived, packed with little bottles of colour. Too little in some cases: the bigger bottles weren’t in stock.

It soon became obvious that:

But apart from that, everything was fine!

I sent off for some more paint from a couple of other suppliers, hoping at least one of them would come through, and meanwhile started on the bits I could do.

I had these lovely big brushes (also from Screwfix) because I’d been painting our stairs indoors:

Sidenote – they may be the most beautiful objects I’ve held in my hand for some time, and they’re just sold as cheap(ish) decorators’ brushes. They were excellent for making big bold lines, and for filling in large areas of colour.

The other type of brush I found invaluable was a flat-edged one, so I could get the lines really precise.

Here are the first strokes:

You can see my progress in reverse chronological order on my Instagram, including the wrong background colour I was trying out at first.

I was back at work before the new paint arrived, so it was a couple of weekends later that I mixed together Lascaux light blue and Daler Rowney fluorescent pink and found a really close match to what I wanted!

And there it is. One thing I hadn’t quite anticipated is quite how much it ‘comes in’ to the kitchen: that is, from certain spots, your view through the window is taken up with a huge bird’s head peeping in. Which I quite like, just hadn’t foreseen.

Now we’ll just have to wait and see how long it is before the damp breaks through, and whether it does much damage. It doesn’t really matter – I’ve achieved a long time ambition of painting a mural at least, and I have these photos to prove it.

And I still had a holiday of sorts, because:

And although it took a bit longer than I’d anticipated, there was something very pleasing about making big brush marks on the wall outside, while through the window my husband pottered about in the kitchen, cooking inside. There was even a point at which my daughter joined me and started painting an old bench. The cats came out to explore. Everyone was happily occupied. And that’s kind of the most you ever hope for from a holiday, wherever it is.