No matter how much time and energy I put in, I never feel like I’m doing quite enough drawing, so it’s always good to look back over the year and realise quite how much paper (and pixels) I’ve stacked up! Here’s a quick run-through of how 2017 looked.

On the 1st, I took the Hourly Comic Day challenge, where you draw one frame for every hour you are awake.

Inevitably, my piece reflected some of the day’s political events:

I’ve definitely got the Hourly Comic Day bug now, and I hope to participate again on Feb 1st next year.

On the 21st, having been beavering away since October 2016, we launched the Draw The Line project website.

This is the biggest comics project I’ve ever attempted: it brought together 114 artists from many different countries, each depicting a positive political action that anyone can take.

I’m still hoping to put out the print version of Draw The Line, and in the new year I’ll be looking at ways to make that happen.

Draw The Line safely launched, I spent the next few months finishing my comic Ladies of the Lakes. Follow that link to read it all online in installments.

I also had it printed up so I could sell it at various festivals and stalls over the year – as you might expect, the Lakes Festival was where demand was highest.

Julie Gough’s Illustrated Women in History project mounted an exhibition and I contributed a small image of the Boston marathon runner Kathrine Switzer.

The Inking Woman exhibition opened in London’s Cartoon museum, and I was honoured to have a piece included in it. This coming March, an accompanying book will be published.

I was away so I couldn’t make the opening night, but here’s a picture from Myriad publishing’s Corinne, featuring many of the exhibitors (click to see it at a larger size):

and here’s a bit of my exhibited image from when it was still in progress:

This is the month when I shared some life drawing I’d done in pastels. I’ve been going along to life drawing sessions most weeks though, so there are plenty more where that came from. Here are a few (click to see them larger): 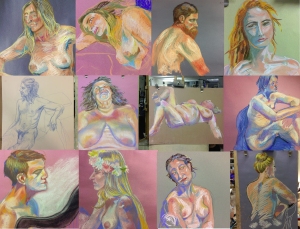 Some weeks I still come away with some awful drawings (and my attempts at the quick 3 or 5 minute poses seem to be getting worse and worse) but on the whole I do feel like I’m making progress.

I entered a strip into SelfMadeHero’s Jeremy Corbyn comic. Sadly it wasn’t selected for publication but at least I had fun drawing cat of the moment, El Gato.

I designed some nice postcards to sell alongside my comics at festivals. I still need to sort out a shop so I can sell these online too! Click to see them bigger.

My love/hate affair with the Comic/Cape/Observer Graphic Short Story contest continues and this year I once again submitted a strip. Needless to say it didn’t elicit even a quiver of notice! As usual, I did my round-up of other unsuccessful (and successful) entries once the shortlist had been announced.

I also spent every day of October doing an ink drawing in the name of Inktober, something I enjoyed (mostly, though it was occasionally a bit of a squeeze finding the time every day) and which I think taught me quite a bit about composition. That was my vague aim so I’ll count that as a win.

‘Only’ seven months after returning from a trip to Florence, I finished the sketch diary I’d been drawing. I also sadly concluded that I probably won’t do any more of these in the near future – they just take up way too much time and the result, while very nice to have, doesn’t really help to further my work.

This month I also spoke at the Graphic Brighton / Caption event. My topic was Draw The Line and specifically how to organise a large comics project from a distance. I’d like to do more talks like this so I’ll be actively pursuing a few opportunities next year.

Recent readers will recall that I made, and blogged, a four-colour linocut Christmas card. Despite a few hairy moments (literally in some cases, when the cats wandered past still-drying ink) I enjoyed this and would love to have time to get better at working with this medium.

I received the very welcome news that Draw The Line had been nominated for a Broken Frontier award. The results will be revealed in January.

And in my last drawing task of the year, I made a party invitation for my daughter:

It’s been a great year, and one aspect which perhaps isn’t reflected in this account of solitary work sitting at my desk, is how sociable and supportive comics people are. It’s been a pleasure to meet and chat with so many of them this year.

Deserving a special mention are Zara Slattery, who has been my accomplice at pretty much every comics event I’ve attended (not to mention all the lifts home from life-drawing classes!), and Simon Russell, who was on a one-man mission to make small press comic-selling more viable with his pop-up stalls.