Bid on some artwork, and contribute to something amazing

You can bid on a whole variety of artwork, including a couple of my prints, at http://www.bidforboat.com. Bids are open until Saturday 14th March, and there are a few ‘flash sales’ where certain pieces are offered for 24 hours only.

The proceeds from this online auction will go to fund an open air theatre here in Brighton, a project that’s very close to my heart.

Here are the prints I’ve donated: 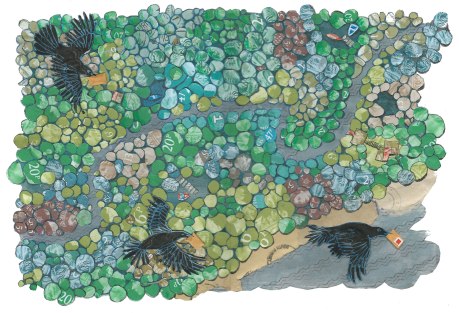 – and if you don’t like them, well, there are lots of pieces of work by other artists up for grabs, including original comic strip art, paintings, and even a couple of vases. Go and bid!

Back in 1990, when I finished my BA, I moved to Brighton to share a house with my best friend, who was in the final year of her degree course. Everyone else in the house was in the same year of the same degree, so naturally, I made quite a few friends from that course.

As it was a fine art and performing arts course, as you’d expect, they were a pretty creative, outgoing, energetic bunch of people: putting on theatrical performances, club nights, stand up comedy, and exhibitions. There was never any shortage of entertainment.

Among the wider group of friends was a guy named Adrian, who was a fairly rare mix: a writer, a performer, and also a builder. This latter skill, as you might imagine, came in very useful when people needed a set building.

Fast forward twenty-something years, and… Adrian was the first of our peer group to pass away. Pancreatic cancer is, apparently, generally late to be diagnosed, and quick to progress, and there’s very little that can be done about it.

His death has caused great sadness. It’s also done something amazing, which is probably the best possible outcome for a death, and something we should all be so lucky to bring about.

Because apparently, Adrian was still as ambitious, and still thinking on a grand scale right up until the end. And he trusted his friends – one of whom is the husband of that friend I shared my first Brighton house with, if you follow me – with… well, what shall we call it? A legacy? A crazy plan? A millstone round their necks? I’ve heard it called all of these things at various times since.

He wanted them to build an open air theatre for Brighton.  He had the site pinpointed (a disused bowling green within one of the city’s parks) and he had used his building knowledge to draw up detailed plans for a grassy amphitheatre with special acoustics incorporated within it.

And then of course, the reality turned out to be much harder than you’d have thought. In the last few months, that small group of friends has formed a legal charity, created a board of trustees (chosen, before his death, by Adrian), fought for – and won – planning permission, raised money with a variety of events, run a publicity campaign, and seen the construction work begin.

It’s not as if those friends lacked a purpose in their lives at all, but by gosh they’ve certainly got one now. In retrospect, as well as being obviously hard work (I say, as a bystander who has done little except attend those fund-raising events and offer the occasional retweet), it’s actually a brilliant legacy because not only does it give a new performing space to the city, but it allows all of the trustees to contribute to it in a meaningful way.

I think that’s about the best outcome you can hope for from an untimely death. And that is why I would encourage you to go and look at the artworks on offer and see if there’s one you fancy, and then bid for it.