I haven’t sent Christmas cards for quite a few years.

I think many artists and makers feel like me: they don’t want to send cards unless they’ve been handmade, or can act as a showcase for their artwork.

But, if you think it’s hassle buying your cards, writing them out, and getting them to the pillar box before last posting day, well, imagine making the things from scratch as well.

I’ve just learned that lesson again, for, indeed, somehow, this year, I have made my own cards.

And, indeed, they did take absolutely ages.

Which is partly my own fault, because I decided I wanted to do a linocut. The theme was originally inspired by one of the Christmas carols my daughter is learning at school: “The rising of the sun, and the running of the deer”.

I did cut a deer, but ironically, it was the design I was least pleased with, and I ended up not using it. 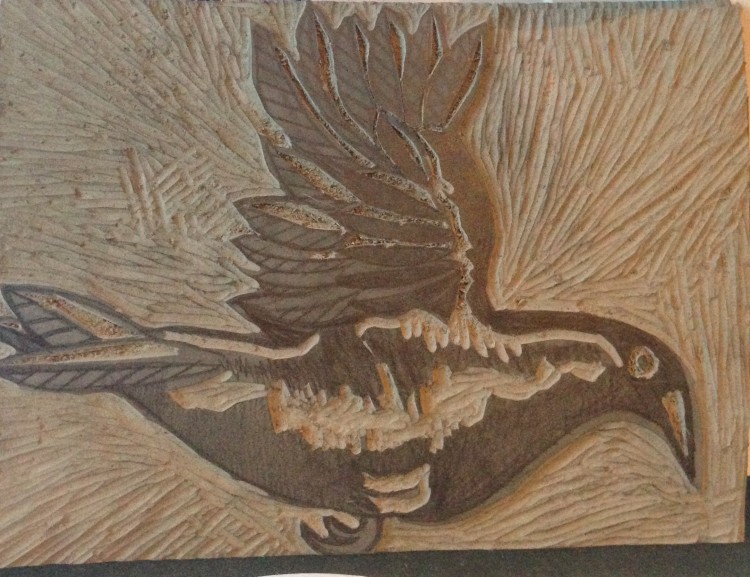 It’s ages since I’ve done a linocut, but fortunately it’s really simple. The only thing to remember is that the print will come out facing the opposite way to the design you create  – so in the final prints, this crow flies right to left.

I thought that some of the detail in the feathers might be too fine for the medium, but I switched to a craft knife instead of the linocutting tool, and it worked. 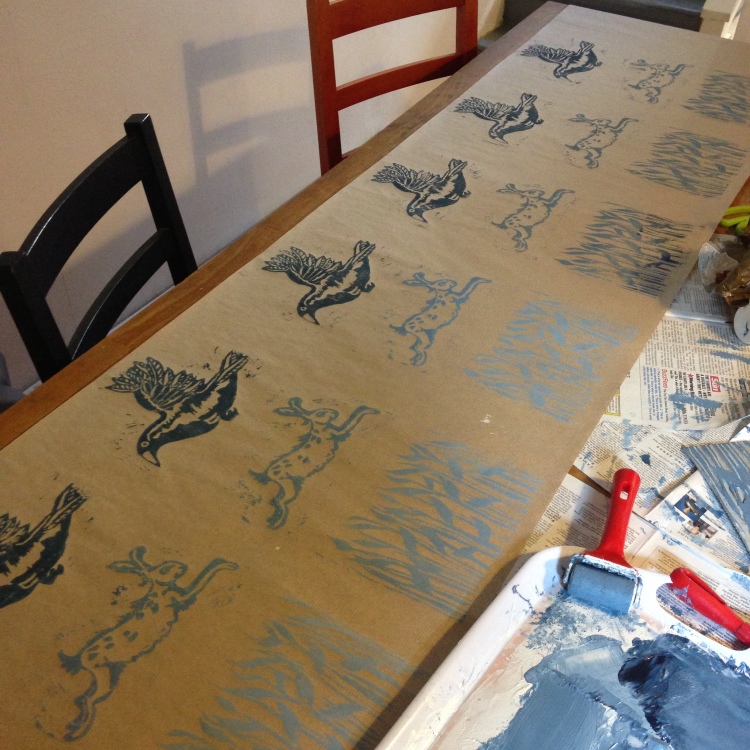 At this point, I remembered that a friend of mine has a fondness for both hares and crows, so I thought that if I made him a print, I could try the lino-cuts out, and create him a Xmas gift, all in one fell swoop.

I made a foliage linocut as well, so the hare had something to be leaping above.

I did several copies across a roll of brown paper, so that I could pick the one where all three elements printed out cleanly. That turned out to be a good strategy, because there were very few where that was the case. It’s not exactly hard to make the prints, but you do have to be paying attention to ensure that every part is inked, and that you’ve applied the right amount of pressure across the whole print, otherwise you get missing limbs and blobby bits.

It would also have been a nice way of making wrapping paper, though, wouldn’t it? And the imperfections wouldn’t matter so much.

Here is the card production line. I was originally going to do each card featuring a hare OR a crow, but when I fiddled about a bit, I decided I liked it better when a) each animal was spread across the fold, and b) the crow appeared as a surprise when you open the card.

And there are some in the bin – deer, mostly.

Now, you can’t go about an art activity in this house without a certain nine-year-old wanting to get in on the act – and as it turned out, that was great. Once we had all the equipment set up, it was an efficient way to make the 40 or so cards she wanted to send to her classmates, teachers and friends.

We added some red glitter to the kitten’s Santa hat at the end, but I didn’t get a photo of that before we packed them all into envelopes…

So, now. Did it take a long time? Yes it did. Maybe a week’s worth of evenings to cut the linos, and a couple of weekend days to print everything out. Plus the trips to the art shop, of course, to buy materials.

And THEN the faff that everyone experiences, whether they buy their cards or make them, of chasing up addresses, writing a note inside each card, buying stamps and envelopes, etc.

For once, I’d planned well enough ahead to actually get it all done ahead of Christmas, so, yay me.

If you’re feeling jealous about that, don’t forget I posted some cards that you can print out for yourself, as well – you’ll find them here.