All right, so this lovely thing happened.

I’ve had this Gudrun Sjoden dress pinned to my wish I could justify that Pinterest board for.. well, for 25 weeks, according to Pinterest itself.

Something about the pattern and the colours really appealed to me, and the cut is one of the few that actually suits my frame.

It had become a benchmark in my mind – I’d see a cheaper dress that I liked, in a shop, and think, ‘yeah, but if I buy two like that, I might as well buy the Cirkus dress, and the Cirkus dress is definitely twice as nice as that, so..’

As we know, it’s quite easy to justify any purchase with this sort of logic eventually. ‘Ooh, I’m so good, I didn’t buy these fourteen things I briefly liked the look of, so now I can definitely reward myself with the thing I really want’.

And that’s the stage I’d reached last week. The Gudrun sale was on, my resolve had weakened, and I was going to buy the dress.

Oh, I’m q sad I missed my chance to get the @GudrunSjodenUK Cirkus dress. I was too strict with myself and now it’s gone :(

The tweet says it all. The leggings were still available, the tunic was there, but there was no dress to be had. And that’s when the amazing thing happened. Gudrun Sjoden tweeted me to say they’d look out for a dress and send it to me, if I’d draw it here.

Talk about an offer you can’t refuse – why, even if I’d bought it with my own money, you know I’d be sitting down to draw that thing.

Now in the end, they couldn’t actually locate a dress in my size, and they sent me the tunic. I have to say, I wouldn’t have chosen the tunic myself, BUT, now I’ve tried it, I’m sold. It comes with a belt, and you can wear the tunic Robin Hood style, a little bit pulled over the belt, which – rather than emphasise voluminous post-baby tummy, which I suppose was my fear – actually looks rather nice. This tunic is going to be paired with black skinny jeans and boots all autumn long.

It *was* fun to draw – though you’ll note that I didn’t draw the whole pattern. Artistic licence! 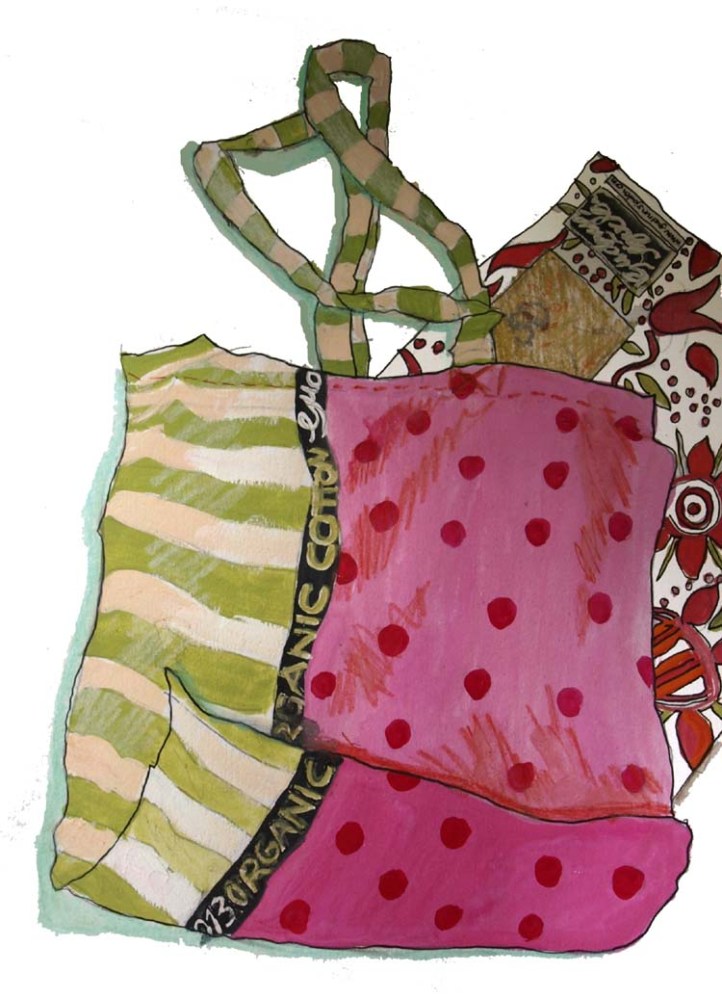 To make the whole thing even more special, it came in not only a floral-patterned envelope, but a polka dot tote bag. It’s as if they knew about me and polka dots.

And there you are, my first ever ‘sponsored post’. Almost certainly my last, though, y’know, if Fat Face, Bravissimo, Boden, or *breathes* Marimekko would like me to draw myself in any of these, I am right here, and, evidence shows, fully amenable. :)