What does a feminist comics residence involve, anyway?

I’ve already covered much of what I found in Helsinki in the comic I shared recently: the unique surroundings; the friendly participants who all had so much in common; the food, for which we didn’t have to raise a finger or pay a cent; and the inspiring speakers. Here’s a bit more detail about the elements that made it so useful and enjoyable.

Ice-breaking: Kicking the whole event off the night before in the historic Yrjönkatu swimming hall and sauna was an inspired move, and meant that even while the snow was piled high on the streets outside, the metaphorical ice was quickly broken. Hard to be aloof when everyone’s unclothed!

Drawing: Active events such as comics workshops, games and zine-making were a welcome chance to put pen to paper, and in between events many of us just went on drawing. We were a room full of captive models, none of us exactly in a position to object, given that we were all drawing too.

Talks: For me, the presentations were the high point. Some speakers were from amongst the ranks of the attendees, and some popped in from elsewhere. I appreciate that a programme full of speakers would have been a different event, more akin to a conference; I also imagine that they’re the most demanding aspect to arrange, logistically, but this was definitely my favourite element of the residence, and I really appreciated the range of experiences they shared.

Getting out and about: Finally, it was lovely to finish up with a trip into town, especially for those of us who hadn’t visited Helsinki before. We nipped into a comic shop (happy to say my comics are now available there!) and had a private view of the non-binary photography exhibition at the ArTAG gallery. We all ended up FEMSKT (the organisers)’ workspace and studio for a low key party. Johanna bought many of our comics to add to the feminist comics library, and to take off to Finnish comics festivals. It was inspiring to see just how much FEMSKT and Johanna have done for women and comics in Finland and beyond.

Just in case you’d like to view some of the same artwork and ideas that we were lucky enough to enjoy, here are some of my personal highpoints.

Johanna Vehkoo is a journalist who collaborated with comic artist Emmi Nieminen to produce a visually impressive volume about online hate speech. From her talk it sounded well researched, and I am very much hoping it will have an English translation soon. Meanwhile, you can see an excerpt in English.

It’s depressing to think that Finland (and presumably everywhere) suffers the same problems with trolls and online misogyny as we do in the UK, but heartening to know that the subject is being thrust into the public consciousness with these beautifully-rendered comics.

Sunna Kitti is the Sámi comic artist you might have noticed in the comic in my previous post. “Yes, I have reindeer”, she began. Her website’s in Finnish but you can certainly enjoy her portfolio full of skilled illustrations.

Rachael House was my fellow Brit, who I was glad to buddy up with on the way to the villa. She gave a great talk about her work in zines and feminist artwork, which extends from banners and embroidered patches to ceramics and even piñatas.

Justine Sarlat spoke about the French collective of female comic creators against sexism, which has its own charter and a page (currently only in French) in which women in the industry recount tales of everyday sexism (“It’s long”, she said sardonically).

Helsinki is rightly proud of its famous resident Tove Jansson, and you can see early frescoes of hers at the HAM gallery.

How did it happen?

Sometimes you can look back and see the exact domino-fall of events that led up to a specific opportunity. In this case, it began with the uncharacteristically impulsive decision to contact a couple of unknown Finnish comic makers and invite them to the UK.

Knowing Siiri, herself an active member of the flourishing Finnish self-published comics movement, gave me good reason to chat to Johanna Rojola (perhaps best described as she is on that page: “artist, producer, publisher, teacher and an activist spanning causes such as feminism, gender equality, global justice”) at the Lakes Comics Festival that year.

After that, Facebook played its part. Love it or hate it, there’s no denying that social media is great when it comes to forging links and solidifying connections. A flyby conversation about Uniqlo’s forthcoming Marimekko line (I am consistent in my passions) was diverted into an invitation from Johanna to the residence. If the residence itself hadn’t been inticement enough, Siiri’s comment along the lines of ‘Are you crazy? The Helsinki charity shops are full of Marimekko at far cheaper prices’ was clearly calculated to hit me right in my known weak spots. Within days the plane ticket was booked.

I wasn’t quite sure what to expect of the residence, but ‘feminist’ and ‘comics’ were good lures, too. Michi Mathias and I had been tossing over the idea of organising a short retreat here in the UK, and I was keen to see how many of our half-formed ideas were in alignment with this established event. It would be interesting to see what worked well, and what we might be able to copy!

As with anyone who grew up with the Moomins as a bedtime story, loves a good sauna, and has come to appreciate Marimekko’s bold textile design, Finland has loomed large in my imagination for much of my life. Yes, I could have visited at any time to see if those Mymble, Snuffkin and Groke-sparked dreams held any reality, but the residence gave me, at last, a concrete reason to visit.

All in all, it made for a memorable and meaningful trip. I’ve already listed the gains on the comics side — what about the fringe benefits?

Well, I came home having seen the Marimekko outlet store but somehow (for which read ‘the exchange rate’) having resisted a purchase.

I did indeed visit those thrift stores with their promised haul of designer labels. I can report that the Moomin shop in Helsinki airport offers everything from Hattifattener rucksacks to Hemulen saucepans. I didn’t actually see a Moomin in the wild, but I did glimpse a huge white hare.

On the language front, I seem to have picked up the words for ‘comic’ (sarjakuva), ‘thank you’ (kiitos) and, by way of this apparently famous hedgehog, one of the more graphic swear words.

But mostly what I’ve brought home is the memory of those very white landscapes, and of those very inspiring women. All things considered, a highly satisfactory set of results, as I’m sure you’ll agree.

I often wonder to myself why it is that I bother with comics. They’re time-consuming; I’m seldom completely happy with my work; and they certainly don’t make me any money.

I always come to the same conclusion. Comics have been a gateway into the most inclusive and welcoming community I’ve ever experienced. They’ve given me a chance to travel to places I wouldn’t otherwise see, and meet people who can show me new perspectives on life. The Feminist Comics Residence was the perfect illustration of this.

Enclosed verandah on the first floor of Villa Salin

View across the frozen bay at Lauttasaari 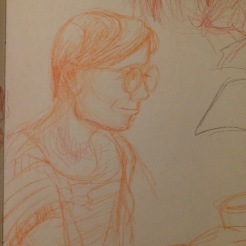 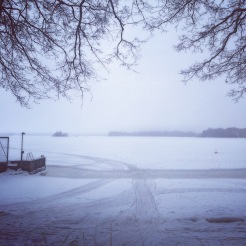 Tyre marks where cars have driven on the sea 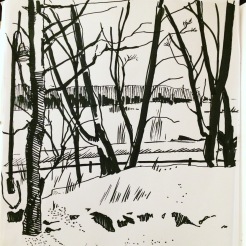 View from the drawing room window 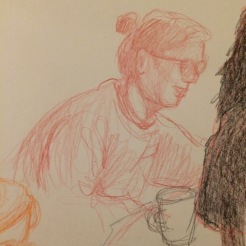 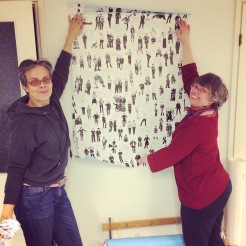 Showing off the ‘feminist wallpaper’ by Heidi Lunabba, soon to be properly installed at the FEMSKT feminist Comics workspace 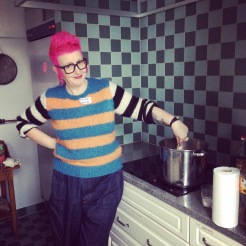 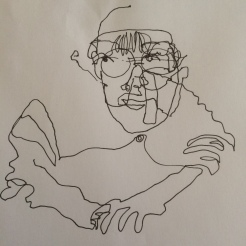 Sketch of a participant 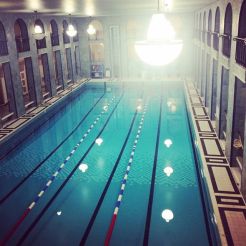 Yrjönkatu swimming hall – no photos allowed while people are actually swimming, so this was a quick snap as we were on our way out. 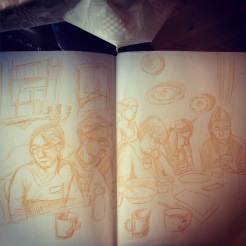 Sketch of everyone around the table, all drawing or thinking 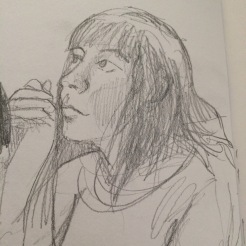 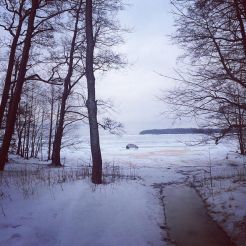 View from a run

House on what would ordinarily have been an island, now icebound. 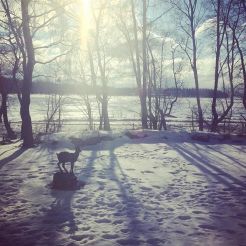 Across the villa garden to the frozen sea 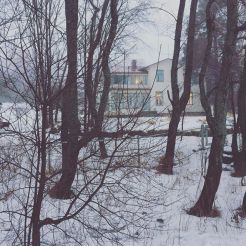 Villa Salin, seen from the back, with the shoreline behind the viewer. 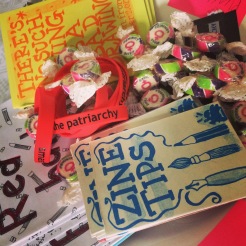 A couple of the participants