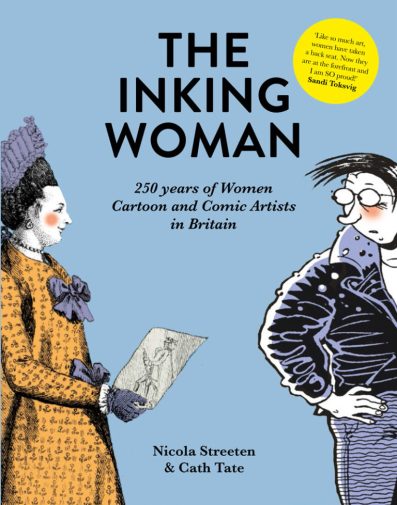 You may remember my mention of the Inking Woman exhibition back in April last year. Well, now the accompanying book is out!

The joint authors are Nicola Streeten and Cath Tate. Among many other achievements, Nicola co-founded the Laydeez do Comics initiative, and Cath was the publisher behind the feminist postcards that graced many a kitchen in the 1980s.

I was unable to attend the launch party as I was (ahem) taking part in a feminist comics residence in Helsinki (about which, more to follow in a future blog post). However, I was lucky enough to get my hands on a copy the night before my travels, and it was just the thing for the three-hour plane trip — always assuming you don’t mind reading sometimes rather explicit comics while squeezed next to a stranger at a height of 35,000 feet, which apparently I don’t.

Here’s the page with my work on it. Of course, that’s the one I turned to first, but take my word for it that there are 138 other pages all bursting with comics by fantastic female creators, accompanied by that all-important thing, context.

My lasting impression was that, as well as being a lot of fun to read, this book has done something very important in recording the history that led up to the current explosion in women making comics. It has cemented and legitimised the work of both professional and grassroots female comic makers, and people like me, who draw comics as a sideline*.

Now this history is in book form, it is ‘official’. It can be put in libraries and cited in academic papers. It provides an easy way for researchers, journalists, and anyone who’s interested to understand what a diversity of women there have been, and still are today, in this ridiculous and often time-consuming endeavour. And, because it’s a lovely hefty hardback volume, it may be just the thing for knocking some sense into all those who shrug and say, ‘Well, there simply are no women making comics’.

It turned out that this was the absolutely ideal book to have read on the way to a feminist comics residence. I’d had the 250 years of history: now here was the future. But as I say, lots more about that later.

*I had to stop and think for quite a while here, over what would be the best word. ‘Hobby’ seems too lame and ‘passion’ seems a bit, well, un-British. I feel as if there may be a French word for something which you are driven to do, out of love for the form. Do comment if you can think of it!