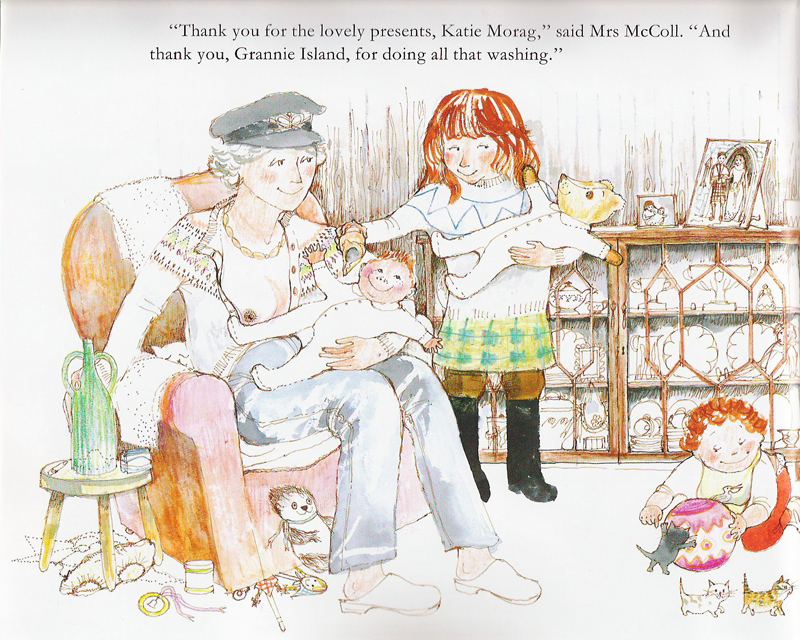 It was great to hear an illustrator on Desert Island Discs yesterday – Mairi Hedderwick, who created the absolutely peerless Katie Morag series.

I was shocked to hear that some libraries actually banned the books for depiction of breastfeeding (?!) but it’s also really heartening that an illustrator can make her own quiet difference by standing ground over such issues. There are actually quite a few breastfeeding images across all the Katie Morag books, as part of the busy jumble of the family’s everyday life.

I also enjoyed hearing about how a grandad was turned into the much more interesting, butch, overalls-wearing, sheep-wrangling grandma character, just by changing her head. When I make modifications to pictures instead of starting from scratch, it never feels quite right, so it’s good to know that in this case, it paid off. The basis for doing so may have been ill-founded (publishers in a certain country weren’t comfortable with seeing a little girl sitting on a male relative’s knee), but the result was a character that perhaps Hedderwick wouldn’t have come to without intervention.

You can listen to the episode here.